Matt Mingay Day: Racing for a Cause at Go Karting World

You are here: Home1 / Random2 / Matt Mingay Day: Racing for a Cause at Go Karting World Slideways Go Karting World at Pimpama will this Sunday (July 17th) host Matt Mingay Day, raising funds for the world renowned Gold Coast based stuntman, who is recovering from injuries received in a recent racing accident in the USA.

Between 9am and 1pm, the proceeds from all go kart sessions will be donated to Mingay’s Go Fund Me campaign (www.gofundme.com/mingayfund), with further money set to be raised through a series of raffles, auctions, simulator races and more.

Special guests already confirmed to attend include Tim Slade, V8 Utes stars Ryal Harris and Ryan Hansford, as well as Charli Robinson from Sea FM, with more to be announced in the lead up to the event, and other special guests set to appear on the day.

A feature will be a silent auction, where members of the public get the chance to bid for the opportunity to drive alongside a star of their choice in a feature relay kart race. To qualify, drivers will have to have driven in one of the regular karting sessions, which kick off at 9am.

Raising additional funds will be a series of auctions for items such as V8 Supercar and drift car rides, with more prizes to be unveiled during the week.

There will also be displays and demonstrations of various race cars, karts and motorcycles.

Mingay was seriously injured on the 4th of June in a Stadium Super Truck accident at the Belle Isle Grand Prix in Detroit, and has subsequently continued his recovery back in Australia.

To date, Mingay’s Go Fund Me campaign has raised over $70,000 towards a final goal of $100,000, which is set to cover some of his medical bills amassed to date.

Mingay, a professional stunt rider since 1998, has grown a cult following the world over, with his antics on two and four wheels thrilling millions of fans at race tracks every year.

“I’m so overwhelmed by the massive level of support my fans and motorsport family have shown since my accident, your encouragement and good vibes is what pushes me to get out of hospital and back to 110%,” said Mingay.

“I also want to thank my good mates at Go Karting World for really getting behind me and showing their support.

“They have such an epic day planned, so if you can, get down there and meet some of your favourite V8 drivers and motorbike riders.

“It will be a great day for not only the mums and dads, but also my number one supporters, all the little kids, as we have a little surprise organised for every child that attends.”

The decision to host the Matt Mingay Day for Slideways Go Karting World Director and former V8 Utes racer Cameron Wilson was simple, as it allows Mingay’s local fans a perfect outlet to show their appreciation.

“Obviously like everyone in the motorsport community, we were shocked when we heard the news of Matt’s horrible accident in the USA recently,” said Wilson.

“Through his awesome stunt work over the years, his drifting and stadium truck racing, Matt has touched so many lives, as we have seen in the outpouring of support so far for the Matt Mingay Day.

“Our plan is to get as many people to Slideways Go Karting World and raise as much money as possible, so we can help to get the Mingay’s through this tough time.

“I’m really looking forward to all of Matt’s fans getting behind him on the day, have a great time kart racing, and dig into their pockets for a very worthy cause.”

Featuring an undulating 700m layout, Slideways’ European Sodi Race Karts are capable of reaching speeds of up to 70km/h.

Children who as less than 140cm minimum heigh won’t be left out, with kids karts that cater for drivers 120cm and up, which can be joined by dual karts and family karts on the venue’s full length race track.

Further information, as well as up to date lists of star guests and prizes, will be available from www.gokartingworld.com.au. 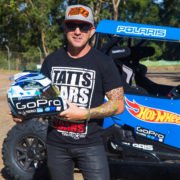