You are here: Home1 / Random2 / RIDE UNITED, the Trailer

Join offroad superstars Antonio Cairoli and Jeffrey Herlings while they train in the Netherlands for the MXGP before watching Tom Pagès as he puts his life on the line learning a new ground-breaking FMX trick in France. Explore an abandoned mental hospital in Spain with Alfredo Gomez, then chase Ryan Dungey as he battles with Marvin Musquin in Florida USA after heading to the hills in California with Cody Webb. Jump on board with Jake Nicholls while he bangs bars with Ben and Nathan Watson in one of the UK’s most insane private tracks. Head to Morocco to prepare for the Dakar desert race with Toby Price before throwing down some whips and riding sand tracks with Justin Barcia, Weston Peick, Cooper Webb and the Martin Brothers across central America.

Whether it’s hitting the MX track at Pastranaland with Jolene Van Vugt, ATV riding at a private quarry in Australia at midnight with the Van Vliet brothers, or getting inverted with Jarryd McNeil fresh after winning XGames, discover the common ground that links us all. The love to ride. We are all United. 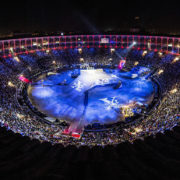 Do you have the skills to be a FMX superstar?
0 replies